The final games are set for each classification, and the first three rounds of this year’s WPIAL playoffs did not disappoint. Before we breakdown the championship matchups for you, we wanted to take a look back at everything that occurred leading up to this extraordinary moment. 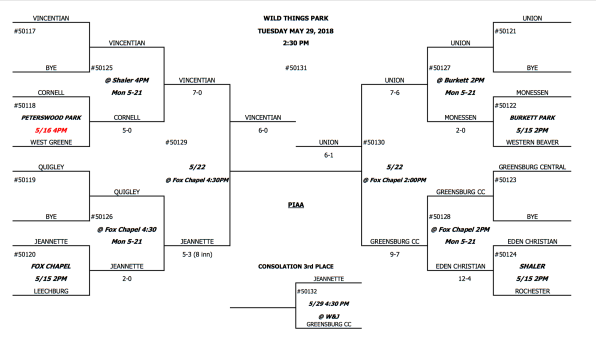 We thought there was a high probability that 1A would end up with the higher seeds making their way to the title game. In fact, there was only one seeding upset in the entire slate of games, and it came from defending champ, Jeannette, and their 5-3 extra inning victory over Quigley. The Jayhawks, and their new opponent G.C.C., battled their way to the final four. But, once they got there, the top two seeds were just too much to handle. Vincentian and Union seemed as if they were destined to meet once again, but for all of the marbles this time. 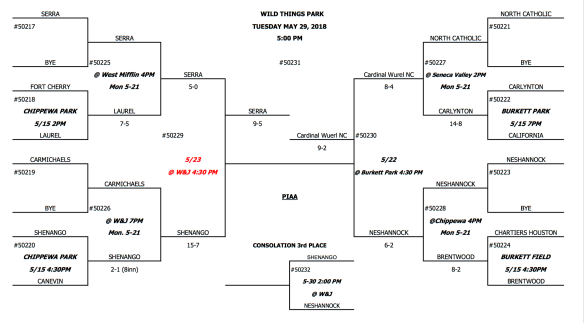 It seems like all year long this conference has been about Serra Catholic. They have been utterly dominant, but there are multiple story lines outside of the Eagles incredible season that need to be highlighted. We thought Shenango had the chance to be a major sleeper team in this scenario, and they answered that call stealing two wins away from Canevin and Carmichaels. Brentwood shocked many with an 8-2 rout over 6 seeded Char Houston. We knew the top three seeds were all powerhouses and would have a really tough time getting knocked out. You will be able to see our breakdown of the Serra vs CWNC matchup shortly.

We only had one prediction wrong in this entire set, and oh my was it a major one. #4 seed, Brownsville, was able to knock off the 3A top-dog – Riverside. The Side played at a different level all year long, and everyone thought they would run away with the WPIAL title, but the Falcons said no. Brownsville controlled the ball game from the start. The Panthers rallied and fought with everything they had, but in the end fell 6-5. The big story on the flip side of the bracket was not Avonworth’s domination to the final, but instead a very exciting first round matchup. Shady Side Academy was in a gritty contest against Waynesburg before Mother Nature intervened. The Umpires took over and ended the game two innings early. Waynesburg was threatening with an excellent opportunity to regain the lead and propel them into the next round. These drastic circumstances provoke the question as to whether or not the WPIAL should enforce the rule that all playoff games must complete the entire 7 inning slate. As stated in our bio, we are not directly affiliated with the WPIAL and have absolutely no say in the rulemaking process, but we think some positive adaptations can be created. 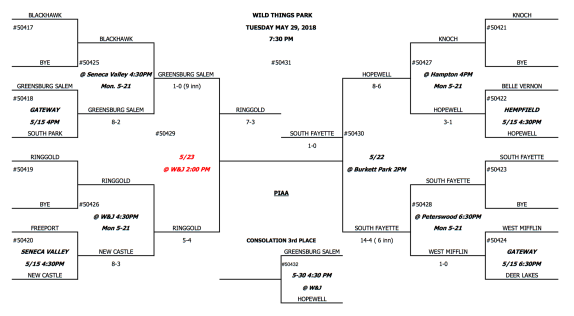 4A was crazy! Greensburg Salem did not just prove us wrong once, but they pulled off the biggest upset the WPIAL has seen all season long. The 8 ran through South Park, and top seeded Blackhawk, en route to a final four appearance. Their two victories occurred in very different manners as well, one they swung the bats and plated 8, the other they scrounged together a single run in 9 innings. On the flip side, Hopewell had similar success. We expected them to win one on the back of ace Joe Rock, but after they were done with Belle Vernon they sent Knoch home as well. As a side note for this conference, two of our favorite teams, New Castle and West Mifflin fought their way through incredible seasons that we were sad to see end so soon. New Castle’s fan base created a media frenzy any time we did not fully support them, which made the Canes’ matchups ones we were very intrigued with. Ben Visnesky was an absolute workhorse all season long, and we are pumped to see what he can accomplish in the future.

There was not a ton of deception in the future for these 13 teams. We knew Mars was capable of a huge run, we knew North Hills would be right there with them, but the outlier was Hampton as they shined throughout the process. The Talbots handled two very talented teams on their way to the semis. They defeated #9 Gateway 4-2, and #1 Moon 9-1. If it weren’t for Will Bednar being such a stud, they might be competing for gold this week. We were extremely intrigued with the offensive juggernaut battle between North Hills and West A in the Final Four. the game ended with 15 total runs, but the Indians of North Hills handled business plating 11 of them. In fact, 5A featured a ton of high scoring performances, with 8 teams putting up 6 or more runs during the contests.

Ok, now I don’t think anyone could have seen this coming. We had Canon Mac, but North Allegheny?! Don’t get me wrong, NA is always a force to be reckoned with and the Tigers easily had the talent at the start of the season to pull something incredible like this off. But, being the 10 seed, losing 3 of the last 4 regular season games, matching up against a 17-4 Bethel Park Squad, and losing arguably the most talented player on their roster to suspension, the stars did not look like they were aligning for the Tigers. Our predicted winner of the entire thing lost 9-1 in the quarter finals. Pine Richland was not able to maintain their talent on paper, and had a very tough time getting all of the cogs to work as one in order to find success. #1 seed Central Catholic showed their dominance in a 6-0 victory over Butler. Marshall McGraw put together a masterful no-hit performance, and showcased why he is one of the WPIAL’s finest pitchers. Canon Mac handled business three times just like we thought they would, and proved that you do not want to see the Big Macs in May.

Make sure you subscribe to our blog on the left side of the screen in order to stay up to date on all WPIAL Baseball information. Follow us on social media, @wpial_baseball and check in with us later when we publish our breakdowns for all 6 of the championship games!